The Radio Amateur Club of the TU Wien was founded in 1983 by Arpad Scholtz (OE1SZW) and the club’s call sign is OE1XTU.

Come by and visit the club’s online blog and find out about our most recent ham radio activities. If this raises your curiosity about experimental radios, antennas and propagation, or your interest in participating, please feel free to contact Christoph Mecklenbräuker (OE1VMC). 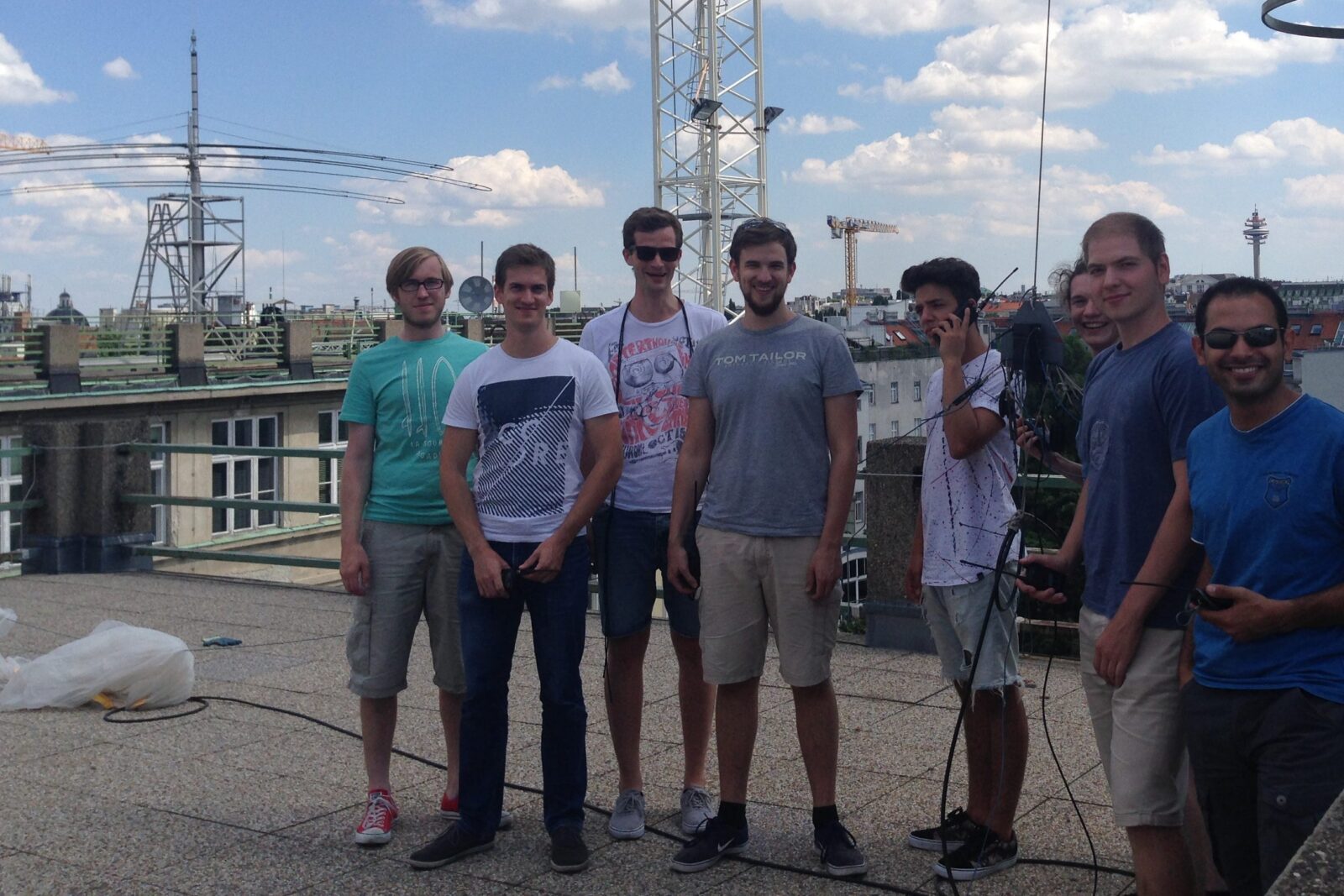 Since June 2014, the trustee of the club is Christoph Mecklenbräuker (OE1VMC). The other two members of the board are Stefan Pratschner  (OE1ABU) and Gerald Artner (OE1GAQ). The club station is located at the Institute of Telecommunications. Our members share two things: Firstly, they are affiliated with TU Wien (or they were affiliated in the past). Secondly, they share their ham spirit and enthusiasm for ham radio. 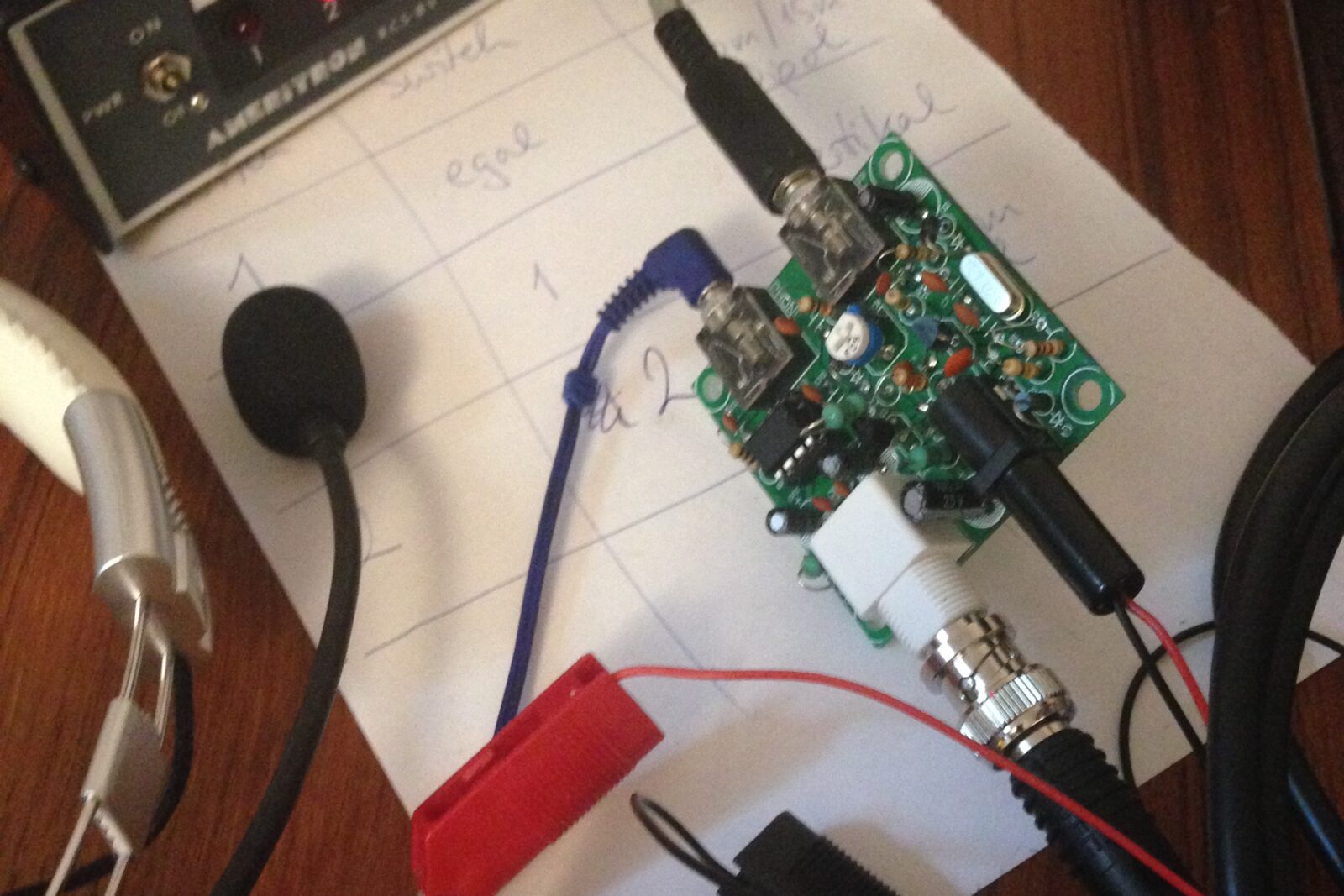 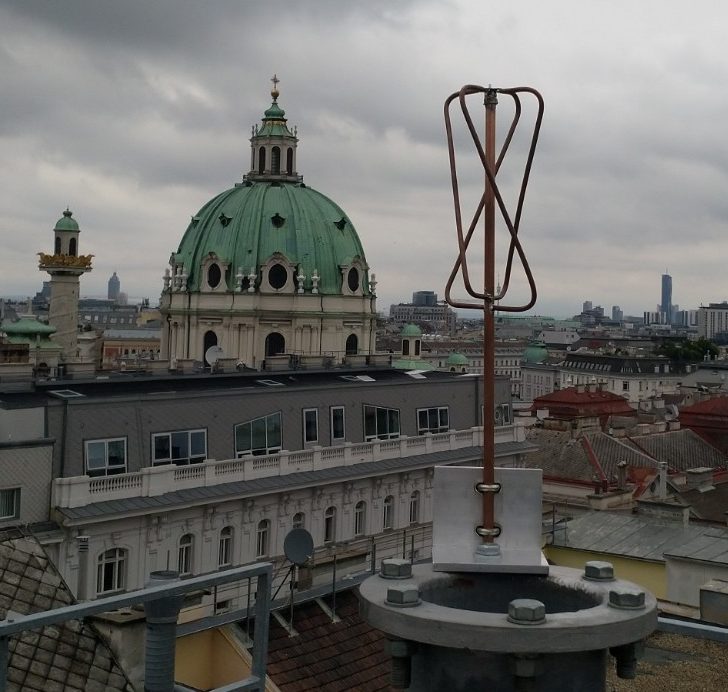 The photos below show the shortwave radio antennas: A SteppIR DB36 Yagi antenna with four motor-controlled elements which is continuously tunable by remote control from 40m and 10m wavelength (left photo). Its construction, function, simulation and first experimental observations are discussed in the Icebird Talk “Die SteppIR DB36 Yagi Antenne” on June 11, 2015. Further, there is a triple band fan dipole in Inverted-V configuration for 160m, 80m, and 40m (right photo, slightly outdated). For shortwave radio (160m-10m) and VHF (6m), we use a FTDX-5000 transceiver. We operate all transmission modes from traditional CW and SSB, to fully digital. 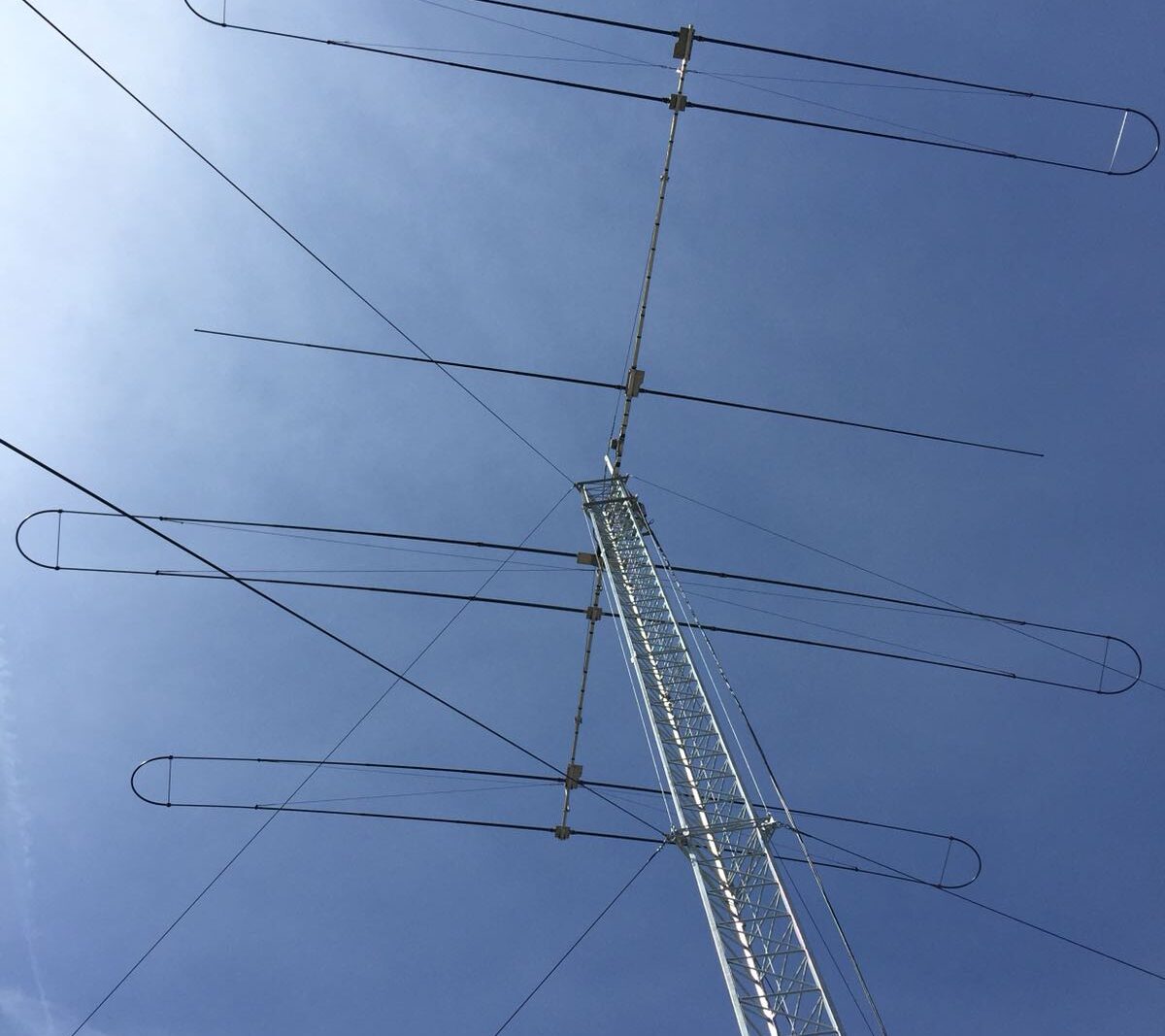 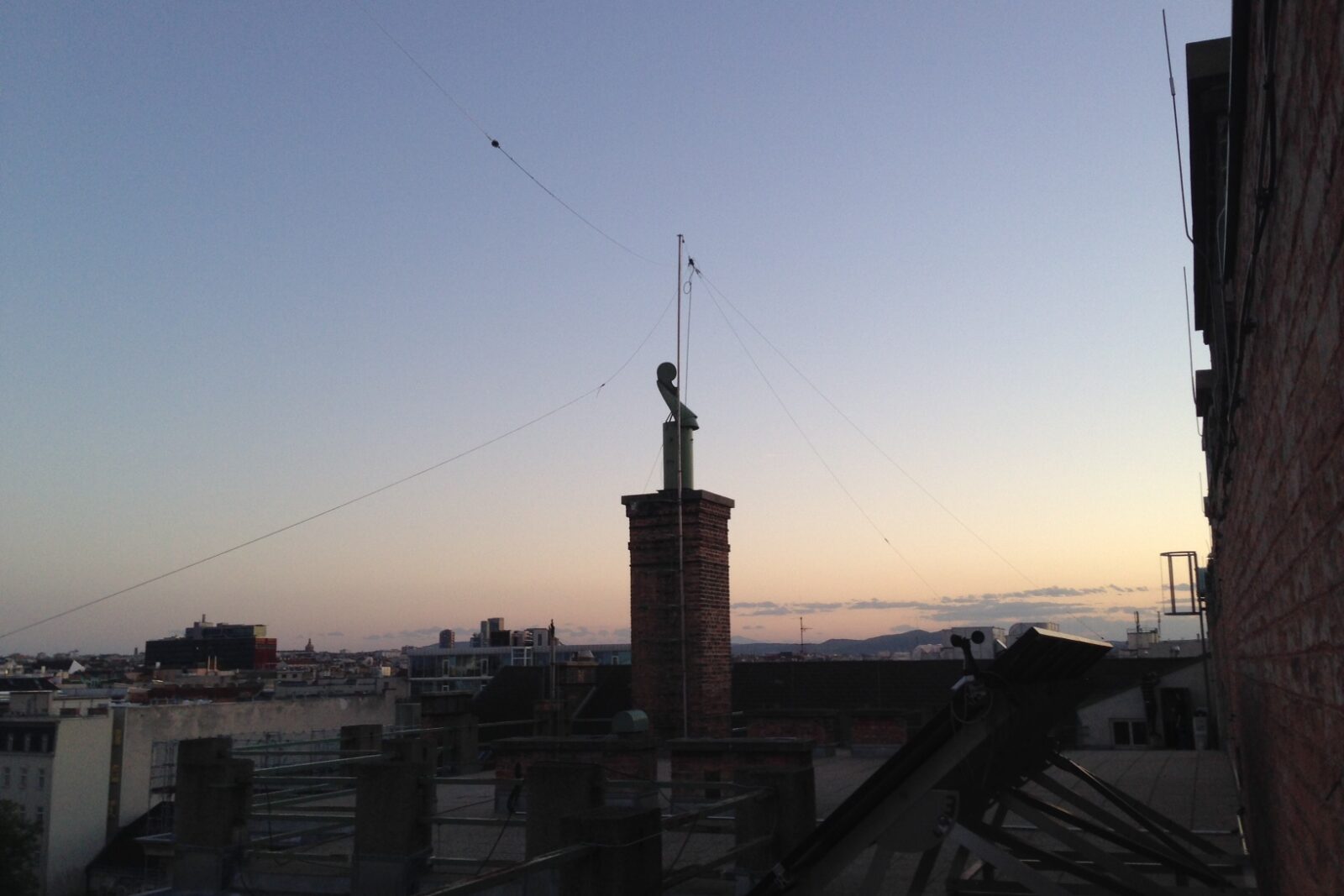 The video below shows the SteppIR DB36 Yagi in its downtown Vienna environment:

The club station participates regularly with its callsign OE1XTU in the All Austrian Contest 80/40m and Emergency Communication Exercise which takes place on May 01 every year. Also, the club station is honored to serve as one of the Austrian Headquarter stations OE0HQ in the annual IARU-HF World Championship in July.

You can predict the link reliability between your location and OE1XTU with VOACAP ONLINE: Detailed band-by-band prediction.

We keep an electronic log of the club station’s radio contacts and confirm contacts electronically via the most popular web-based online services (LOTW, QRZ.com, eQSL, clublog).

For the 6m band (also known as the “magic” band), we have manufactured a 6-element Yagi-Uda antenna according to a published design specification by YU7EF. This antenna is mounted above the SteppIR DB36 on the same mast.

Since Spring 2016, the club is also ramping up its activities on the X-band (3cm wavelength) which belongs to the SHF spectrum. The institute of telecommunications holds experimental transmit licenses for X- and V-band radio technology and propagation research (in addition to the regular privileges of the OE1XTU amateur radio license):

Our current experimental setups are based on a YAESU FT-817 transceiver (generating/receiving 432 MHz intermediate frequency) and a transverter which converts between 432 MHz and 10.368 GHz (by Kuhne electronics). Microwave antennas in use are WR90 waveguide  horn antennas (16 dBi gain) and a 57cm diameter offset feed parabolic dish (giving approx. 35 dBi gain). See photos below. Currently, the transmit power is 4 W. 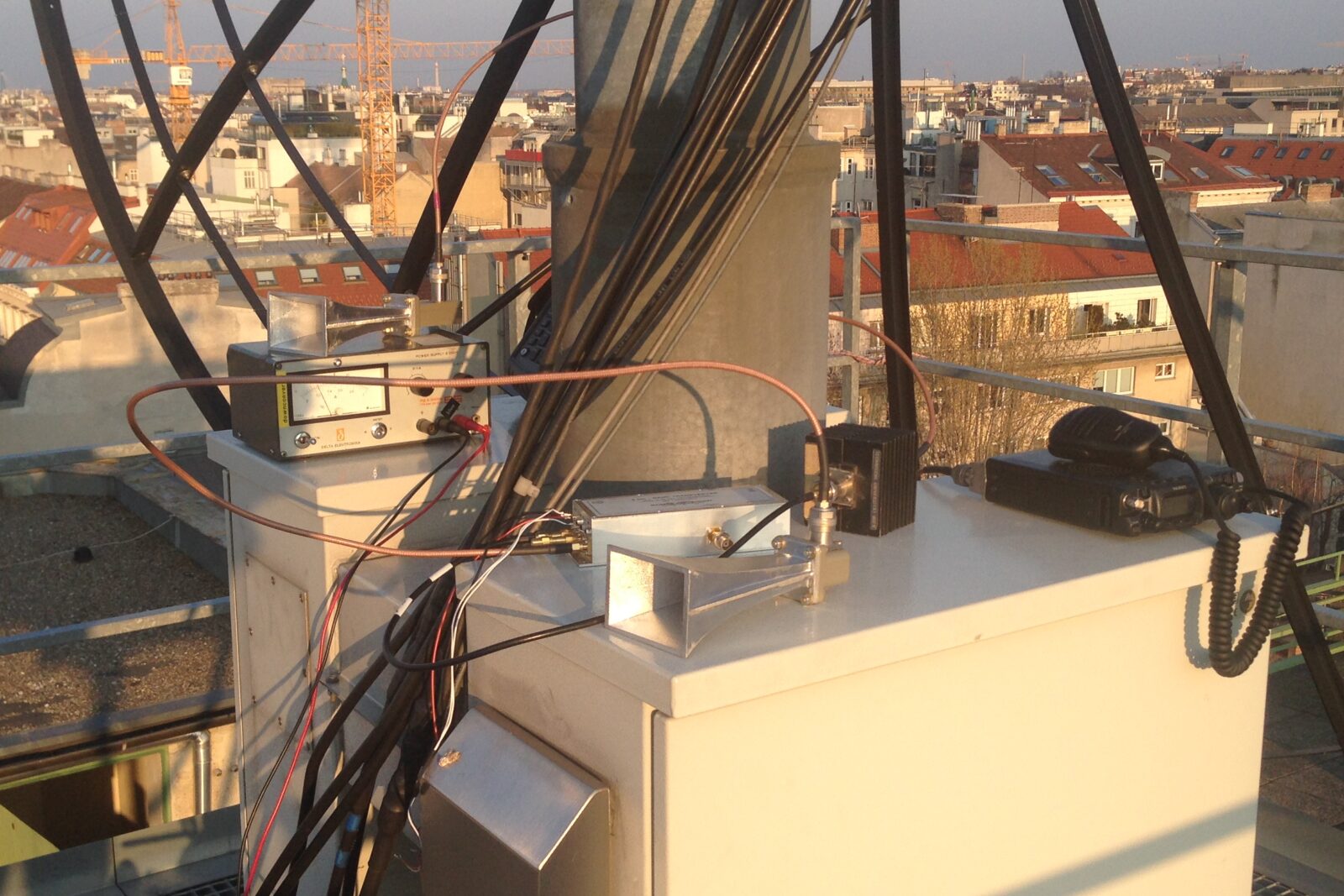 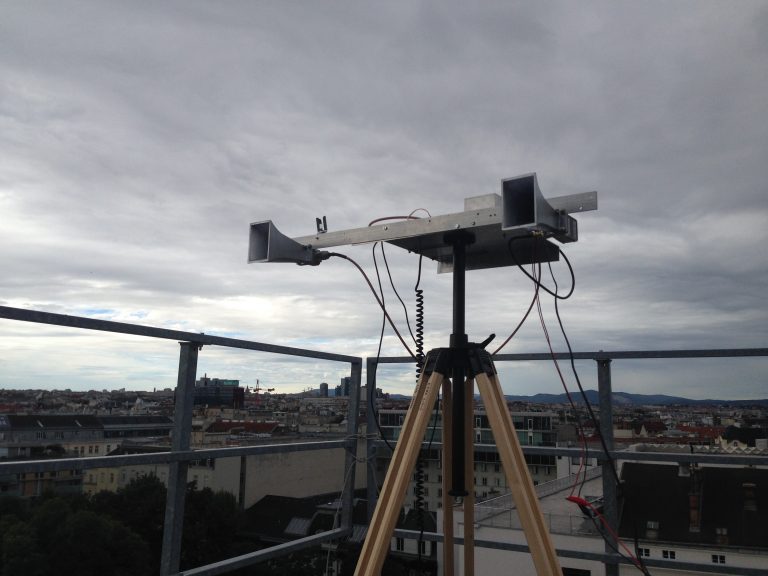 Students designed and manufactured this optimized feed horn for the 57cm diameter commercial dish. They measured the antenna pattern in the shielded anechoic chamber. 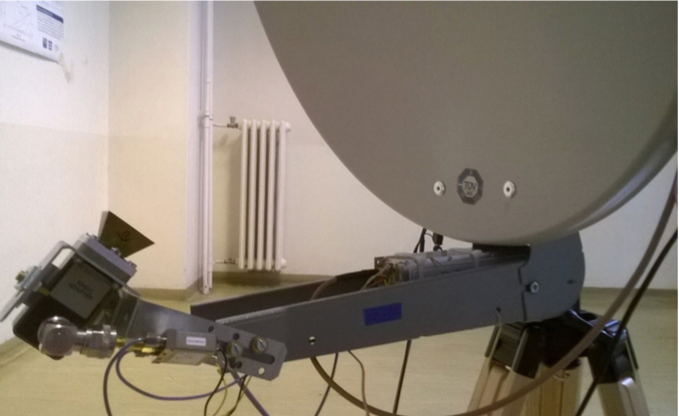 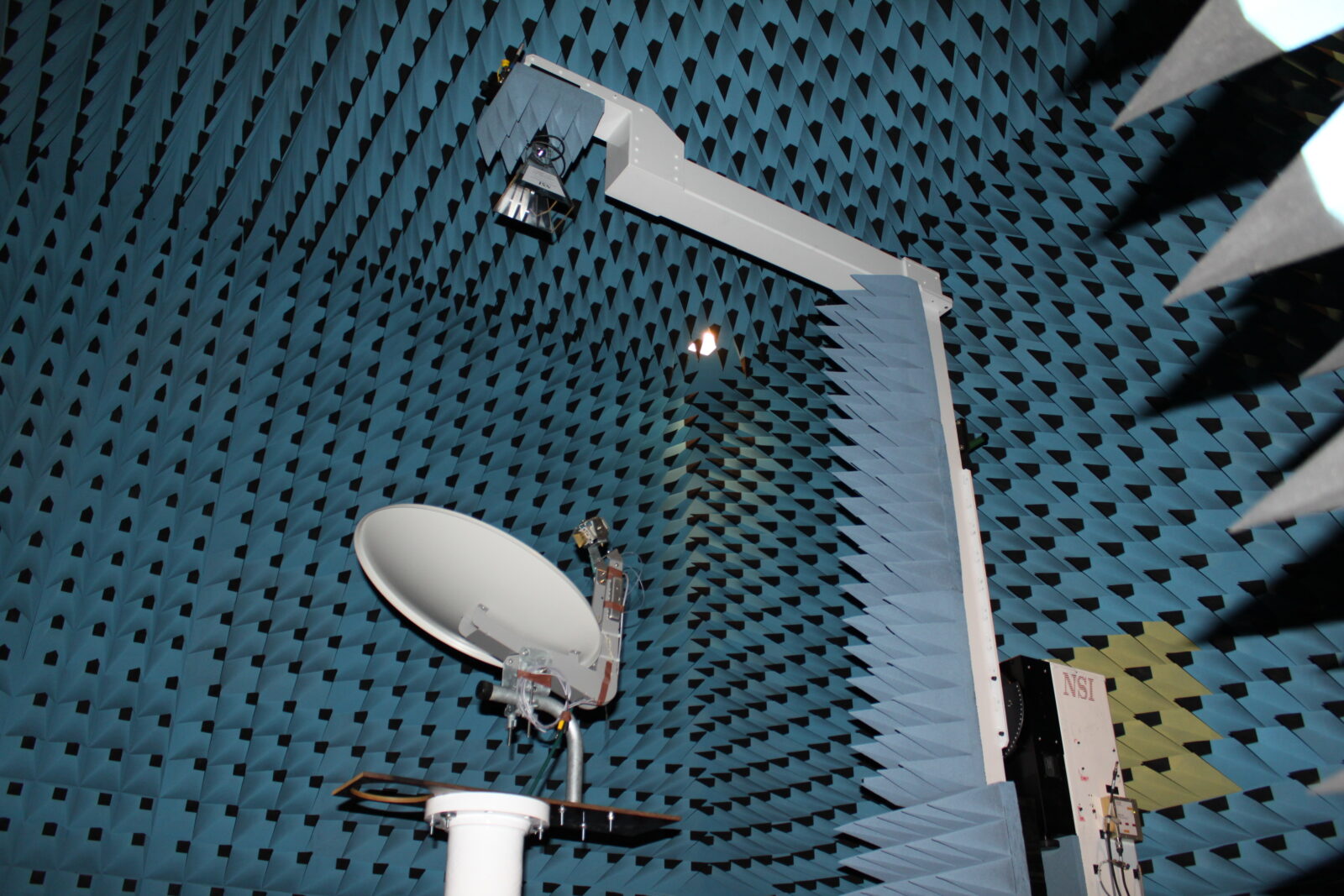 Our website uses cookies to ensure you get the best experience on our website, for analytical purposes, to provide social media features, and for targeted advertising. This it is necessary in order to pass information on to respective service providers. If you would like additional information about cookies on this website, please see our Data Protection Declaration.